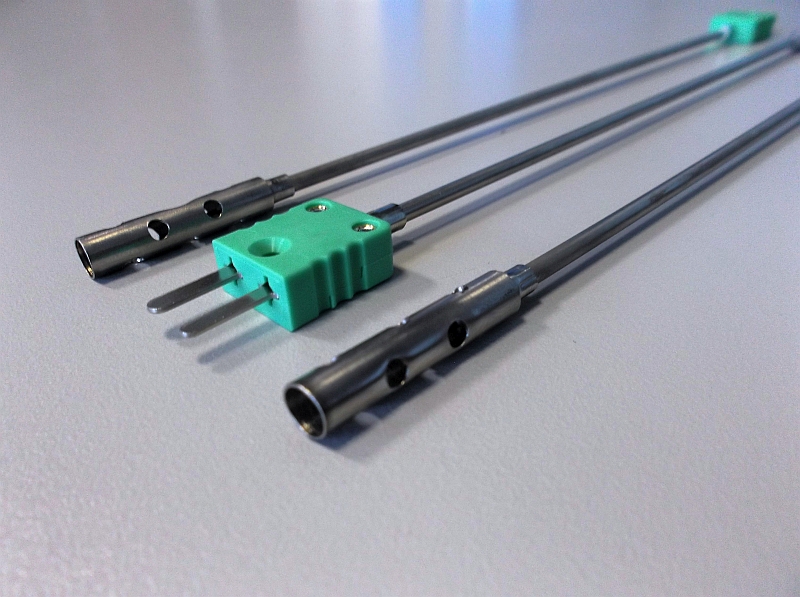 Definition, operation, types and use of the thermocouple temperature sensor

What is a Thermocouple?

The Thermocouple is a Temperature Transducer whose operation is based on the EMF (Electromagnetic Field) Thermoelectric effect.

It is suitable for numerous applications thanks to the possibility of being made with various combinations of metals that determine the type and temperature range of use, all defined by international standards.

For the determination of the temperature range of use, in addition to the type of thermocouple, the diameter of the individual conductor wires used for the construction must also be consider.

How a Thermocouple works

The Thermocouple consists of an electrical circuit formed by two different combinations of metal wires (conductors) joined / soldered together at their ends. When these junctions are subjected to a variation in temperature, due to the Seebeck effect, a difference in electric potential is created.

The junction subjected to the temperature to be measured is called hot junction or measuring junction, while the other end that is opened to the voltage measurement system (electromotive force) is called reference junction or cold junction (usually at a known temperature of 0 ° C).

Operating principle of a Thermocouple

The thermocouple works according to the Seebeck effect principle.

In 1821 the physicist Thomas Johann Seebeck discovered that when there is a difference in temperature between the junctions of two electrical conductors of different metals or alloys, a corresponding electro-motive force (f.e.m.) is produced. This phenomenon is now known as the Seebeck effect or the thermoelectric effect.

How a Thermocouple is built

The Thermocouple consists of two different metal conductors connected to one end called “joint”. As the temperature varies, the voltage that can be read across the conductors varies and this variation provides a measure of the temperature at which the joint is located.

The junction point is classified into three types:

The joint is in direct contact with the environment in which the temperature is to be measured. This results in a very fast response time. This type of processing is obviously not recommended in corrosive environments or where extreme conditions exist.

The measuring joint is integrated in the protective sleeve. Again, the response time is quite fast. It is used in corrosive environments or in conditions of high pressure.

In this case the hot junction is completely isolated from the protective sheath. Response times lengthen slightly compared to grounded and exposed hot junction. They are indicated for executions where there are parasitic electromotive forces due to potential distortions of the measurements.

A large variety of thermocouples are available with their own characteristics depending on the combinations of metal wires used which make them specific for different processes and sectors of application.

This type of Thermocouple is the most widespread in the industrial field and is available in a large variety of sizes. The maximum temperature limit is about 1100 ° C, although for short exposures it can reach 1200 ° C. Sensitivity is 41 µV / ° C.

If exposed in oxidizing atmospheres in the temperature range between 815 ºC and 1040 ºC, oxidation can be the cause of a thermal drift of its calibration.

The element is also suitable for applications down to -200 ° C

The Thermocouples Type-K, although widely used due to its wide operating range and low cost, are not as stable as other common metal sensors in common use. At temperatures between 250 ° C and 600 ° C, especially at 300 ° C and 550 ° C, the thermal hysteresis can cause errors of various degrees.

Furthermore, in the K type, high temperatures can lead to substantial variations in the output signal due to the reduction of chromium present in the positive conductor (risk of oxidation).

Its measurement range goes from -40 ° C to 750 ° C and being more limited than the K type, it makes them less common than the latter.

They are often used in the plastic molding manufacturing sector. Thermocouples Type-J are characterized by low cost and high sensitivity (51.7 µV / ° C) but cannot be used above 760 ° C due to a magnetic transition that causes them to lose calibration.

Since the oxidation problem is associated with iron, some precautions must be taken when using this type of thermocouple in an oxidizing environment. Under ambient temperature, attention must be paid to the potential embrittlement of conductors, while in humid environments to condensation that could form rust on the iron conductor.

Thermocouples Type-T are very stable and are often used in applications at very low temperatures, carving out a niche in the market in temperature measurements carried out in the Laboratory despite having rapid oxidation for exposures above the temperature range.

Its temperature range is between -250 ° C and 900 ° C with a high sensitivity of 68 µV / ° C making them suitable for low temperature applications.

At moderate temperatures, Type E Thermocouples offer greater stability than Type K and Type J by having more stable temperature values. However, they have almost the same disadvantages as type K in that also in type T chromium is present in the positive conductor (risk of oxidation).

Thermocouple E is considered more stable than Thermocouple K and more suitable for accurate measurements. However, Thermocouple Type N scores a few more points in its favor for stability and temperature range.

With the right choice of materials for the outer sheath, they are the most suitable for high temperature measurements in vacuum conditions (for pressures below the atmospheric pressure) and in oxidizing environments thanks to the addition of Silicon in the composition of the conductors.

Thermocouples made of metals such as Platinum and Rhodium fall into this type. They have a high stability and are used almost exclusively for high temperature measurements also due to their low sensitivity (10 µV / ° C).

The noble metal thermocouples types are: Type B, S, R.

Thermocouples Type-B are suitable for temperature measurements up to 1800 ° C (the highest of all Thermocouples) while maintaining maximum stability and accuracy.

Thermocouples Type-S are suitable for temperatures up to 1600 ° C and for short exposures up to 1700 ° C.

In all applications, except those in extremely clean conditions, the element must be protected with a ceramic sheath so that small quantities of metal vapor do not cause deterioration and therefore the reduction of the f.e.m. produced.

Continuous use at high temperatures can cause deterioration due to a diffusion of rhodium in the platinum conductor with consequent reduction of the output signal.

Type R Thermocouple is composed of metal wires in platinum – 13% rhodium (+) and platinum (-).

Thermocouples Type-R are similar to Type S Thermocouples for measurements up to 1,600 ° C but have the advantage of having a slightly stronger output signal and better stability.

They are often preferred to Type S Thermocouples despite having a higher cost due to the higher percentage of rhodium.